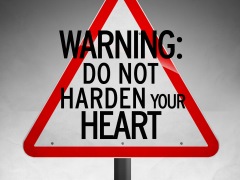 Today was my first time leading Torah study at Congregation Shomrei Torah in close to three years. It was a joy to be back with such a large, wonderful, engaged group of learners. Because today is Shabbat Hagadol, the Great Shabbat, the shabbat before Pesach, I strayed from this week’s torah portion to talk about spiritual aspects of our upcoming holiday.

About five years ago at my family seder, I had included a line about God hardening Pharaoh’s heart during the last plagues, and we launched into a long discussion about God taking free will from the despot, and whether, therefore, Pharaoh was off the hook and God on it for what followed. I took the sentence out the next year, because I couldn’t quite put my finger on how to offer a different way to look at the spiritual message of this exchange.

Still fascinated by the issue today, I brought it to the group, and we explored a variety of commentary about the hardening of Pharaoh’s heart. Before we started, we looked at one of my favorite texts from Devarim/Deuteronomy, and we talked about the ways we harden our own hearts.

Deut. 10:12 And now, O Israel, what does YHWH your God demand of you? Only this: to revere YHWH your God, to walk only in G!d’s paths, to love G!d, and to serve YHWH your God with all your heart and soul, 13keeping YHWH’s commandments and laws, which I enjoin upon you today, for your good. 14Mark, the heavens to their uttermost reaches belong to YHWH your God, the earth and all that is on it! 15Yet it was to your fathers that YHWH was drawn in love for them, so that [G!d] chose you, their lineal descendants, from among all peoples—as is now the case. 16Cut away, therefore, the thickening about your hearts and stiffen your necks no more. [Literally circumcise your heart] 17For YHWH your God is God supreme and Lord supreme, the great, the mighty, and the awesome God, who shows no favor and takes no bribe, 18but upholds the cause of the fatherless and the widow, and befriends the stranger, providing him with food and clothing.—19You too must befriend the stranger, for you were strangers in the land of Egypt.

This text tells us what we must do: revere, love and follow the Holy Blessed One. But, how? By opening our hearts, softening our hearts, so that we can just, fair, uphold the cause of the vulnerable and befriend the stranger. This is a powerful message, especially when you think about the powerful image of circumcising our hearts.

On the other hand, these are also characteristics that Pharaoh did not embody or practice. But still, did G!d really have to go so far with him and his people? What was the point of going so far? Our commentators through the ages have also struggled with these questions. I have identified four basic concepts from my reading, four different explanations, that may or may not satisfy different people. But they spurred the group to think more deeply.

The first argument, put forth by Nachmanides (Spain and Israel, 1194-1270) and Sforno (Italy, 1475-1550), was that the hardening was an alternative to coercion from the plagues themselves, preventing Pharaoh from turning from his ways until he had a choice. If Pharaoh turned toward the good of letting us go because of his fear of the plagues, trembling at the signs and miracles, this would not have been a sincere teshuvah, but merely action to avoid pain and suffering. God, in this argument, fortified Pharaoh’s resistance to let his psyche survive the plagues and keep following his original path.

But then, someone in class today argued—as have others, why did God have to go so far? Someone replied that God stopped to give Pharaoh a chance to change, but he turned back to his evil ways each time.

The second argument is similar to the first, that God isn’t hardening so much as strengthening, giving him the fortitude to make his own choices. R. David Schatz notes that it could be seen as God’s way of respecting Pharaoh’s choices, helping him follow his own path, freely chosen. And, in turn, this also lays the responsibility squarely in the earthly king.

The next argument, advanced by Maimonides (Spain and Egypt, 1138-1204), is that the hardening was a punishment. Pharaoh becomes deprived of free will, the potential to act rightly and the chance to turn away from evil. The group was not so sure the last two punishments would have been perceived as punishments by a man raised to think he was a god.

The final argument was that heart hardening is a part of the process of living one’s life. If the way to cut away the thickening around our hearts is to work every day on consciously and conscientiously making good choices, then Pharaoh, throughout his life, and through the first five plagues, had made so many bad choices that even if, on some level, he could finally fathom that he was not all powerful, that he was not god, he still could not change sincerely and sustain it. His course was set, he was not doing his daily Mussar work, and he had reached the point beyond habit until he was now unable to change. David Hartman, z”l, (US and Israel, 1931-2013) wrote that

God created humans in such a way that once we set out on a course in life – noble or nefarious – we become “wired,” in a sense, to continue on that path. Based on this reading, God did not harden Pharaoh’s heart so much as he created a world in which Pharaoh’s ongoing refusal to free the Hebrew slaves gave birth to a self-perpetuating reality. For this reason, Pharaoh represents the antithesis of freedom. He is the embodiment of enslavement, of both the self and the other.

As we discussed this idea, one person noted that being brought up to believe you are god, gives you a sense of entitlement that is hard to break. Someone else brought that to our day, with the children of the wealthy who believe they can do whatever they want. Another person mentioned a study in which children who played a game were observed. One set of children were allowed to win consistently. They became convinced that they were entitled to win, deserved to win, should win, even though the game was rigged. I recalled an experience with a group of Bnai Mitzvah students, in which we staged a play in which one of them, one of the sweetest, kindest children I know, played God. That evening, after the play, he became what his mother considered “a little too full of himself.” Just 20 minutes as God and a sweet child changed, thankfully only for a moment. He was fortunate to have a mother who knew to help bring him back to earth.

This discussion reminded me of the recent case in Texas in which a 16 year old drunk driver killed four people and seriously injured two more. Instead of going to jail for 10-20 years, he was given probation, because the judge bought the defense’s argument that because the child had been brought up with no limits, he was not responsible for his actions, what the defense argued was a case of “affluenza”. As noted elsewhere, it is ironic that the judge perpetuated the parents’ errors by continuing to not hold him responsible for his actions. I kept wondering what would have happened had he been African American and/or poor, and don’t really need to wonder. We know.

But I keep thinking that somehow this modern sense of being a god, or a Master of the Universe, or a Wall Street banker, could benefit from some serious cutting away of the thickening around our hearts. And that if we are not willing or able to do it, it wouldn’t be so terrible for there to be some balance restored in our universe through a form of consequences.

As I prepare for our family seder on Monday night (charoset done, chicken marinating), I pray that we all work to rid ourselves of the haughtiness of spirit that afflicts us, identify where our enslavements are, where we have hardened our own hearts, where our habits prevent us from being the people we can truly be, and that we can see a path across the Sea of Reeds to softness and empathy and responsibility.

Before I close, I want to share the first and last verses of the old spiritual that we sing on the first night of Passover, Go Down Moses. I hadn’t remembered the power of the final verse. This spiritual starts us in g’nut, degradation and oppression, and moves us to the place where we have the choice about how we deal with what comes before us, to shevach, or victory and praise, that place where we know we can deal with the chains that bind us. Sometimes we need to help others, we need to look into the face of slave masters and the slave owners and help those whose cries we hear.

When Israel was in Egypt’s Land,

Oppressed so hard they could not stand,

Way down in Egypt’s Land.

We need not always weep and mourn,

And wear these slavery chains forlorn,

May your night be filled with questions, love and more questions, and lots of good food and ideas to free yourselves and others still in chains.